SNMP traps are information sent using the SNMP protocol from monitored equipment to a poller server. This information contains multiple Attributes including:

In order to be able to interpret the event received the Network supervisor server needs to possess in its configuration the necessary elements to translate the event. For this it must have a database containing the OID and the descriptions, this is what is called MIB files. There are two types of MIB:

MIB manufacturers can be retrieved from the equipment. Centreon allows us to store the definition of SNMP traps in its MariaDB database. The traps can subsequently be linked to passive services via the Relations tab of the definition of a service. 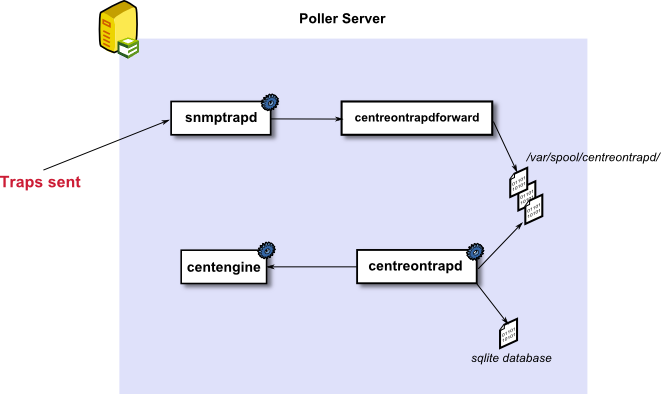 The Centreon Gorgone process is responsible to copy the SQLite base on the remote poller.

Successive actions by the centreontrapd process​

Successive actions by the centreontrapd process are:

To call the ‘centreontrapdfoward’ script, the file /etc/snmp/snmptrapd.conf must contain the following lines:

You can optimize the performances of snmptrapd by using the following options:

These options can be changed in the file /etc/sysconfig/snmptrapd:

To change the buffer folder towards which the information will be written, change the configuration file /etc/centreon/centreontrapd.pm:

You can also map the folder in the RAM, by adding the following line in the file /etc/fstab:

Configuration of the service​

In the file /etc/centreon/centreontrapd.pm we advise changing three settings only (if necessary):

On a poller, edit the /etc/centreon/centreontrapd.pm file: